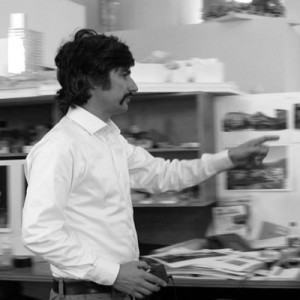 Angel Borrego Cubero (Llerena, Spain, 1967) is trained in architecture, with a PhD from ETSA Madrid and a MArch from Princeton University, where he was a Fulbright scholar. He has been teaching architecture and working as an architect since the ‘90s while also developing an interdisciplinary body of works that deal with issues such as the contemporary urban condition, the negotiations between private and public space, violence, surveillance and fictions in architecture.  Using mainly site specific installations, new media and video installations, his work has been exhibited in internationally acclaimed venues such as the Art Fair ARCO, the National Museum of Art Reina Sofia, LABoral, Artium, El Matadero Madrid etc. In 1999, he founds Office for Strategic Spaces (OSS), an art and architecture office which develops research projects (Mutant Bridges, Pump Up Housing, Post Tsunami Housing, Urban Space Station), designs exhibition spaces, housing and social housing, urban planning strategies (Solar Decathlon Madrid, Masterplan for the 1st Art Biennial 01sj in California USA) as well as rehabilitation projects (Film School Pedro Almodóvar, Cultural Factory in Matadero Madrid) etc.

Awarded among others, with the First Prize COAM’14 (Award given by the Architects Association from Madrid) for The Competition, he has also got a Special Award COAM’15 and a nomination at the European Award for Contemporary Architecture Mies van der Rohe15 for his Cultural Factory and he was a finalist at the Ibero American Biennial of Architecture’12, within the Research section, for his project Pump Up Housing etc.

After winning the 1st Prize in a big international competition, in a process akin to a thriller, Borrego decides to make a documentary of this recurring architectural procedure. During four years, intense work was dedicated to find, document and edit one competition into film format. The Competition is the first feature documentary of this Spanish director and is also the first film documenting the tense developments that characterize architectural contests. He is also the author of short films and videos installations such as: Administrative Landscape (2013), ShinyFlatSmooth (2003), Peace O’Mind I&II (2003), The Chase (1999), Cacharros (1999), Baby y Pipa (1998).