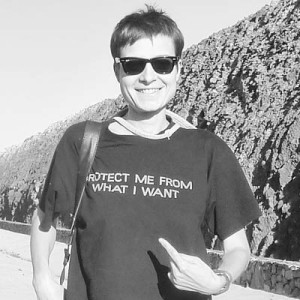 Simona Rota (Mäcin, Romania, 1979). With a MA in International Relations (2003), and a BA in Political Sciences in Bucharest and Barcelona, she also studied Photography (2010) in Madrid.

Freelance consultant of communication and digital identity for architecture (since 2009), she has been collaborating with: Office for Strategic Spaces, Menis Arquitectos, Miralles-Tagliabue Arquitectes, the Laboratory for Research and Innovation in Architecture from Tenerife, Es Baluard – Museu Modern i d’Art Contemporani de Mallorca. Previously, for four years, she worked as an Office Manager at Fernando Menis’ studio (2004-2008) while also coordinating the production of several workshops and exhibitions of architecture in collaboration with organizations such as the Circulo de Bellas Artes de Tenerife, the Architects Association from Madrid – COAM, the Berlin gallery AEDES etc.

While collaborating with Office for Strategic Spaces – OSS (since 2011), she’s got involved with the press and marketing of The Competition, a documentary film, produced by OSS and directed by Angel Borrego Cubero.

Photographer, her most substantial work was the documentation of the Modern Soviet architecture, commissioned by the Museum of Architecture in Vienna and developed between 2010 and 2012 in the former Soviet republics. She is the author of two photography books Missbehave (Vibok Works, 2013) and Ostalgia (Fabulatorio, 2013). The latter won the D&AD In Book Award for books (Design & Art Direction, UK, 2014) and the Award to the Best Photography Book of the Year PHotoEspaña in the national category (Spain, 2014). In addition, the Kursala series, that includes Ostalgia won the Gràffica Prize (Spain, 2014).